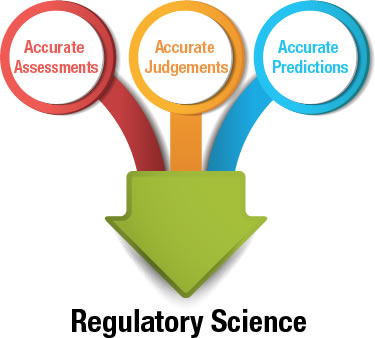 Regulatory Science evaluates new findings and technologies scientifically and appropriately regulate them, while ensuring their efficacy and safety, so that the findings and the technologies can be maximized in the societies.
The concept of regulatory science was proposed by Dr. Mitsuru Uchiyama in 1987, who was the deputy director general of the National Institutes of Health Sciences at the time. He defined regulatory science as “science of evaluation and judgement which regulate progress of scientific technologies to be beneficial to society and human beings in the most optimal way.
In the 4th Science and Technology approved by the Cabinet on August 19, 2011, regulatory science was defined as “science of precise prediction, evaluation, and judgement based on scientific evidence in order to adapt the achievements of science and technology to social and human needs in the most optimal way.”